The Story of Noah’s Ark

By Laura Ankrom
Aug 30, 2022 Leave a comment
in Everyday Life,Moms

There are amazing details in the stories of the Bible. These details point to Jesus. It’s time to follow our curiosity to see just how eloquently the Old Testament stories point to Jesus.   Noah and the Ark is one of the most well-known of Bible stories. New moms theme the nursery after the story. Toy companies capitalize on the early educational possibilities of having a Noah’s Ark toy (think animal names, counting and even colors in the rainbow). Opponents of the Bible are quick to point out the irony. It’s a story of rescue for one family, but it parallels judgement and destruction for everyone else. Given that, why do we theme our nurseries with the story of Noah’s Ark? Let’s take a closer look at the details to find an answer.

Why God Flooded the Earth

First, let’s turn to Genesis 6:5-8. In this passage we find that people were so wicked that every thought and intention of their hearts were only evil, all the time. That’s bad! Can you imagine living in a world like that? Can you imagine how much it must grieve God’s heart to see his creation rebelling at that level? I’ve mentioned before that the Fall is a major theme throughout scripture and Genesis 6 is a perfect example. You simply can’t miss the extent of their rebellion.

In contrast to what was going on with everyone else, we learn in Genesis 6:9 and 22 that Noah was a godly man.  He was blameless, walked faithfully with God (see also Hebrews 11:7) and obeyed God. Noah tried to live his life the way God wanted him to. It’s not easy to walk against the tide of culture. And it seems that Noah was pretty much alone in his convictions. Later in the New Testament, we learn that Noah was a preacher (herald or messenger) of righteousness (2 Peter 2:5). We see that Noah didn’t just do what was right, he talked about what was right. That’s a bold thing to do when everyone else is wicked. He probably wasn’t invited to many parties!

Building Plans for the Ark

If you’re a nerd like me, the research that’s been done by Answers in Genesis might be of interest. Inside Noah’s Ark: Why it Worked was fascinating! Noah didn’t have computers. He did have basic mechanics. From clean water to waste removal this book offers practical and plausible ways the ark could withstand a worldwide flood. The Bible gives very little detail about the construction of the ark. It was made of cypress, with rooms for all kinds of animals, 450x75x45 feet (smaller than the Titanic, larger than The Wyoming), three decks with a side door, an upper roof with an opening, completely covered with tar. This left plenty of remaining details for Noah to figure out! Inside Noah’s Ark: Why it Worked gives us a picture of what the ark might have looked like based on technology of the time. 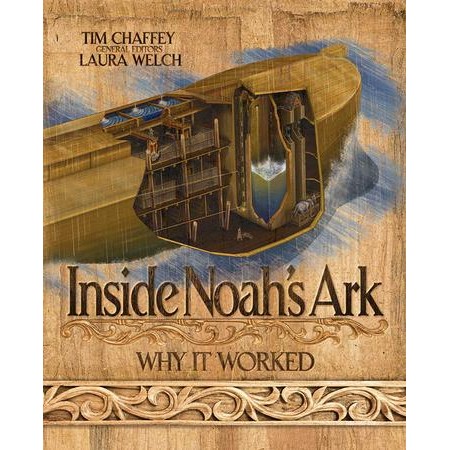 One very interesting detail in God’s instructions for the ark was that it was covered inside and out with tar or pitch. The Hebrew word used here is very interesting. The actual word can mean covering, tar or atonement. Atonement means payment or ransom.  The ark was the means of rescue for Noah’s family. It was covered inside and out with tar. The tar protected the family from the flood waters, the literal judgement of God. Spiritually, the atonement of Christ keeps the believer from judgment. Isn’t it interesting that in Romans 3:25 we see that Jesus’ blood was the payment for our sin, “God gave Christ as a sacrifice to pay (atone) for sins through the spilling of his blood. So, God forgives the sins of those who have faith.”  Just one glimpse of Jesus in the story.

The Door of the Ark

After construction was complete, God miraculously herded the animals to Noah in male/female pairs (Genesis 7:8-9).  Here we find another detail. In Genesis 7:16 we see that God closes the door to the ark. If God closed it, it was sealed tight! The family was protected from the flood waters of judgement. Likewise, our salvation is certain when we put our trust in Jesus.  The Bible tells us we are safe in Jesus’ hand (see John 10:27-29).

In 1 Peter 3:20-21, Peter explains to us that the water in the flood in Noah’s day serves as a picture of the coming baptism of followers of Jesus. Just like God saved Noah and his family from the waters of the flood, we are saved from eternal death through Jesus Christ, which is symbolized in the waters of baptism. As we go under the water, we identify with Christ’s death for our sin. As we rise up out of the water, we are identifying with Christ’s resurrection and the hope we have of living with him eternally in heaven.

Now read Genesis 8:21-22 and Genesis 9:11-17.  God promises to never destroy the earth again with a flood. God leaves the rainbow as a sign of His promise (covenant). Look closely at Genesis 9:14-17. Isn’t it interesting to note that God is remembers his promise each time there is a rainbow breaking through the clouds?! God does not forget his promises, they are sure!

Now read Ezekiel 1:28 and Revelation 4:3. Both of these passages give us a description of heaven and the throne of God. Here we see that God’s throne is surrounded by a rainbow! How about that?! God’s throne is surrounded by the sign of His promise. The rainbow is not just heavenly decor.  Ezekiel says the rainbow is visual evidence of God’s glory. God is glorious for many reasons and one of those reasons is that He is a promise keeper!

Next turn to Matthew 34 and Luke 17  where Jesus talks about the days of Noah and pending judgement. The flood came unexpectedly to those around Noah.  As a result many people were taken away by the flood waters of judgement. Similarly, Jesus says he will come again, this time in judgement. Some will be taken away to be judged, and they won’t see it coming.  Just like God gives Noah forewarning of the flood, Jesus gives warning of his second return to prepare people.  Noah had faith to believe God, do you have similar faith to believe Jesus?

Not Just a Story

The story of Noah’s Ark is about both judgement and rescue. It’s a story of mercy toward a faithful family during a time of great wickedness. I hope by now you are seeing the picture of God’s unfolding plan of salvation. The Bible gives us hints of things to come. When stories in the Old Testament illustrate atonement, promises (covenants), judgement and rescue, it’s important to look for ties to God’s plan of salvation through Jesus. Not just separate stories, these are glimpses of Jesus that make the Old Testament come alive. If your nursery is themed after Noah’s Ark, make sure your children grow up knowing why the story is so important!

This post may contain affiliate links, which means I receive a small commission, at no extra cost to you, if you make a purchase using this link. Please see my disclosure for more details.

I have more ideas!

Need more help?  Be sure to sign up for our newsletter and weekly reminders of new blog posts!  You’ll get great resources sent straight to your inbox!